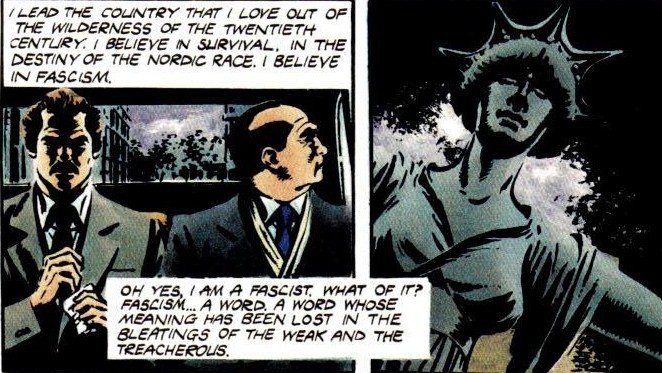 “Good evening London, this is the voice of fate.

Almost four hundred years ago tonight, a great citizen made a most significant contribution to our common culture. It was a contribution forged in stealth and silence and secrecy, although it’s best remembered in noise and bright light.

To commemorate this most glorious of evenings, her majesty’s goverment is pleased to return the rights of secrecy and privacy to you, its loyal subjects. For three days, your movements will not be watched … your conversations will not be listened to … and ‘do what thou wilt‘ shall be the whole of the law.

V:
“It does not do to rely too much on silent majorities, Evey (naam), for silence is a fragile thing … one loud noise and it’s gone. But the people are so cowed and disorganised. A few might take the opportunity to protest, but it’ll just be a voice crying in the wilderness. Noise is relative to the silence preceding it. The more absolute the hush, the more shocking the thunderclap. Our masters have not heard the peoples voice for generations Evey … and it is much, much louder than they care to remember.”

Evey:
“All this riot and uproar … is this anarchy? Is this the land of do-as-you-please?”

V:
“No. This is only the land of take-what-you-want. Anarchy means ‘without leaders’, not ‘without order’. With anarchy comes an age of ordnung, of TRUE ORDER, which is to say voluntary order.
This age of ordnung will begin when the mad and incoherent cycle of ‘verwirrung’ that these bulletins reveal has run its course. This is not anarchy, Evey, this is chaos.”

“Turning and turning in the widening gyre, the falcon cannot hear the falconer. Things fall apart, the centre cannot hold. Mere anarchy is loosed upon the world.”

Authority, when first detecting chaos at its heels, will entertain the vilest schemes to save its orderly facade … but always order without justice, without love or liberty, which cannot long postpone their world’s descent to pandemonium. Authority’s collapse sends cracks through bedroom, boardroom, church and school alike. All is misrule.

Equality and freedom are not luxuries to lightly cast aside. Without them, order cannot long endure before approaching depths beyond imagining.”
(p. 193 – 199)

Since mankind’s dawn, a handful of oppressors have accepted the responsibility over our lives that we should have accepted for ourselves. By doing so, they took our power. By doing nothing, we gave it away. We’ve seen where their way leads, through camps and wars, towards the slaughterhouse. In anarchy there is another way. With anarchy, from rubble comes new life, hope re-instated.”
(p. 258)