It has been nine days since two islamist inspired brothers forced their way into the Paris headquarters of Charlie Hebdo. Twelve people were killed, amongst them cartoonists Charb, Cabu, Honoré, Tignous and Wolinski, and eleven people were wounded.

Some Amsterdam-based street-artists have been quick to respond.

In the south of town, in the Van Baerlestraat, you can find the graffiti slogan above, which is created by Laser 3.14. “They shoot cartoonists, don’t they?” 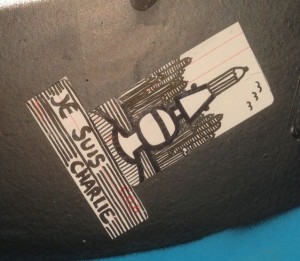 At the NDSM area, in the north of Amsterdam, a sticker can be spotted by the originally German street-artist WoJo. “Je suis Charlie”, his character says.

Another sticker you’ll find there appears to be a bit older, so it probably has nothing to do with the Paris attacks. Nevertheless, it portrays Snow White, while she’s performing an islamic prayer and wears a veil.